The Dispute in the Caucasus

On September 27, A military conflict erupted between Armenia and Azerbaijan over the Nagorno-Karabakh (NK) region. It is estimated that this resulted in more than 300 casualties including civilians from both sides.

NK is an enclave located inside Azerbaijan and has ethnic Armenians as a majority of the population. The dispute regarding the ownership of the NK region dates back to the 1920s when the Soviet Union invaded the Caucasus region to reclaim the fallen parts of the Russian Empire and took control over Azerbaijan and Armenia. Under Stalin’s rule, USSR drew borders to allocate territories to its constituent members. The central government of the USSR included NK as a part of Azerbaijan disregarding the fact that it was the Armenian Majority that resided in NK. The local Armenians never accepted the border drawn by the central government and demanded to be under Armenian rule. 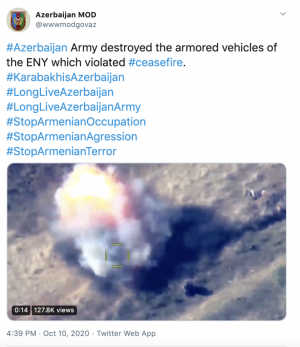 Nearly 70 years later with the collapse of the Soviet Union, the NK declared independence as the Republic of Nagorno-Karabakh, also known as the Republic of Artsakh. This ignited a war between Armenia and Azerbaijan that came with massacres and ethnic cleansing by both sides. In 1994, a cease-fire was put in place but the region remained strained with hostility between the two sides.

This conflict raises a concern for European Nations. Since Azerbaijan hosts a pipeline that delivers gas and oil to Turkey and Europe. The instability of the region may result in volatile prices of gas and oil. As it is in Europe’s interest to prevent the energy costs from rising, the EU released a statement condemning both sides of this conflict. Russia as well seeks a peaceful solution. Nevertheless, Turkey takes a firm stance on supporting Azerbaijan with military supplies further intensifying the tension.

On October 10, Armenia and Azerbaijan agreed on another ceasefire under RussianMediation. However, only 5 minutes after the ceasefire agreement, the Azerbaijan Army

attacked Armenian military vehicles which they claim to have “Violated ceasefire.” The number of innocent lives lost as a consequence of this conflict will continue building until the war ends.