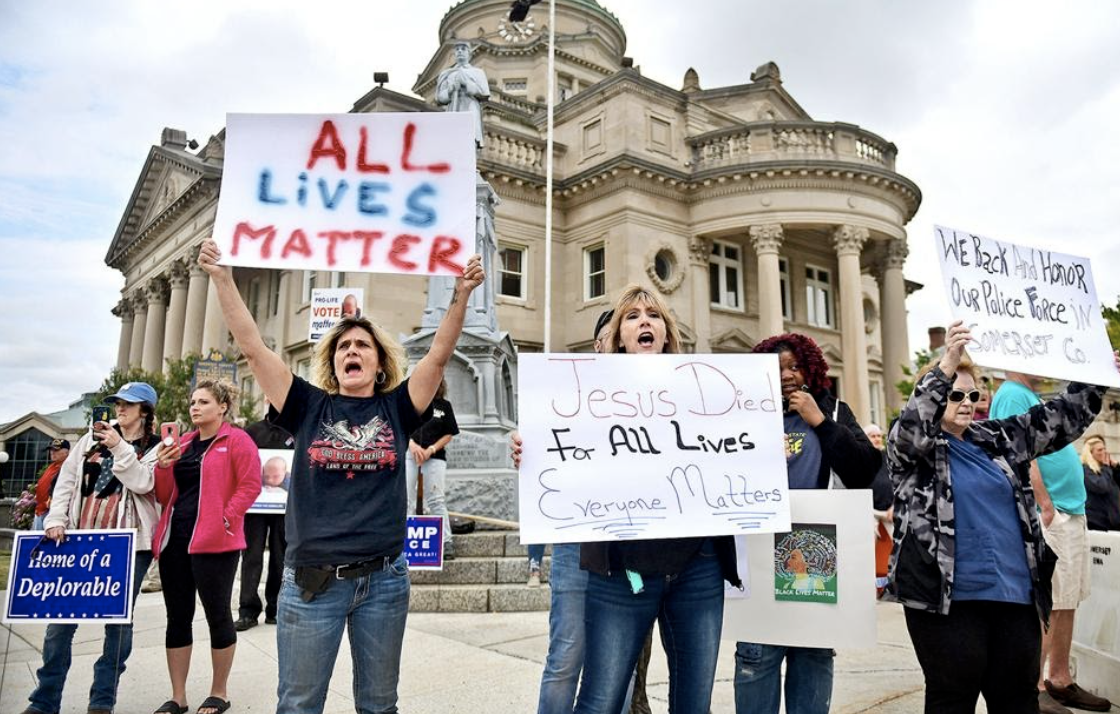 The Black Lives Matter movement has jumped to all-time heights after the untimely death of George Floyd back in May of 2020. Following this was a wave of reactions: increased coverage of social issues, protests across the globe, and petitions advocating Justice for Breonna Taylor, Jacob Blake, and several other people of color that have been the subject of unwarranted police violence. But of course, like every movement in history, BLM has its counter-arguments:

“All Lives Matter.” “Blue Lives Matter.” Whether it’s an offhand remark or a shout at a full-blown rally, these mottos have been thrown around in the midst of tensions in America. However, many, including myself, believe these sayings to be ignorant and disrespectful towards people of color for a number of reasons. But let’s not be too hasty: what are some common arguments for ‘All/Blue Lives Matter’ supporters? And how can they be proven otherwise?

“Why can’t we just not acknowledge race at all? Wouldn’t that get rid of all the problems?”

In an ideal world, race wouldn’t be an issue when it comes to judging others. Unfortunately, this is not an ideal world. If you ‘can’t see color’, then (whether you mean to or not) you are inferring that you don’t recognize the racial injustices that current people of color are facing today. I think this mindset has good intentions, but ultimately it should be cast away for now.

Perhaps one of the more common misconceptions is that the phrase “Black Lives Matter” has an underlying subscript that says other lives don’t. This couldn’t be further from the point. While I can agree that the statement ‘all lives matter’ should be true, unfortunately as of right now, not all races are receiving equal treatment from society. The BLM movement is not trying to invalidate problems that white people have, nor problems that everyone has. It’s merely trying to bring attention to the fact that people of color have problems that occur purely from the color of their skin. Take America’s racial wage gap, for example. According to Stephen Miller, a writer for SHRM, “on average, black men earned 87 cents for every dollar a white man earned,” while “Hispanic workers had the next largest gap, earning 91 cents for every dollar earned by white men.”

“Not all cops are bad! Blue lives matter!”

Once again, I feel like the message has been misinterpreted here. Perhaps you may have heard the term “ACAB” on social media recently, which is an acronym for “All Cops Are B*stards”. Since then, this term has received backlash, and that’s how the saying “Blue Lives Matter” came to exist.

However, let’s put things into perspective. In the US, while white felonies are more likely to be arrested by police, their black counterparts are 2.8 times more likely to be killed in the arrest procedure– in fact, this rate can go as high as 6.51 in certain cities in America (NewScientist).

With that being said, let’s explain ACAB. This slogan refers to the corrupt parts of the justice/police system and is advocating for change in the faults and cracks of the system. It is not calling each individual cop a b*stard– I don’t believe that every single cop is a b*stard either. Instead, it is saying that “every single police officer is complicit in a system that actively devalues the lives of people of color,” as put by Victoria Gagliardo-Silver, a writer for the Independent.

So, while we are pointing a spotlight on police violence against minorities, we are not trying to devalue the deaths of white people against unwarranted police violence, nor trying to push a message that all police abuse their power– but we have to understand and realize that the scale is tipped right now, and we need to make priorities. And in regards to police officers of color; they should be held accountable if they don’t actively address their fellow officers that use prejudices and biases to control their actions on duty.

Maybe this article gave you some insight; maybe your views haven’t shifted at all. But bringing awareness and attention to social issues is just the tip of the iceberg when moving towards making a permanent change– and the change starts with you.

Why companies were so quick to endorse Black Lives Matter

2 Responses to “Debunking “All Lives Matter””